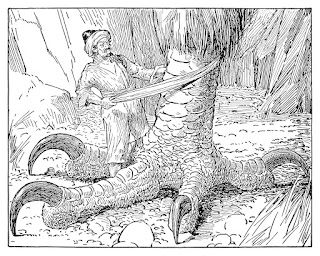 The Cinomolgi are migratory birds, known for building their nests with cinnamon wood collected from some faraway clime. To hunt these dangerous predators is to court disaster, but a single nest lets a band of cinnamon hunters live comfortably for years.

Lair: Cinnamon branch nest. High above in ancient pines. The ground below littered with feces, red-and-yellow feathers, pine cones and the bones of game. The nest itself an emperor’s ransom in cinnamon branches (worth 10d6 x 100 gp). 1d4-1 eggs, each enough for a week's worth of omelette.

What is the cinomolgus doing?

MINI ZINES ABOUT THE RED PLANET:

I've expanded a couple of my blog posts into short A6 fanzines. They're available as Pay-what-you-want products if you follow the links below:
Toad of Holding
Remnants of the Restless Republic
The d13 Tribes of Vacuum Nomads

blogs i kind of follow, so i can find them again